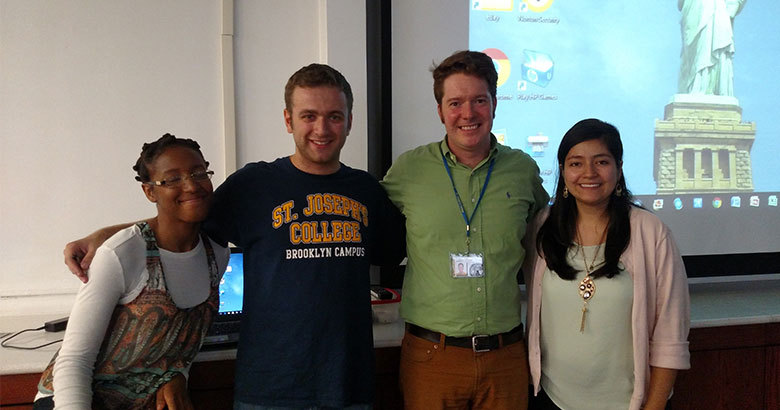 As the world reacted to Monday night’s presidential debate between Hillary Clinton and Donald Trump, SJC Brooklyn held a post-debate screening Tuesday for students during Common Hour. Moderated by Dylan Yeats of the Department of History, the event provided a forum for students to view sections of the debate and offer their own thoughts on what transpired.

“Since 1960, U.S. presidential debates have been televised,” Yeats explained, referencing the first general election debate 56 years ago between Nixon and Kennedy, before introducing video of this year’s debate. “I want you to pay attention to the substance of the candidates’ responses, not just their temperament and demeanor.”

Yeats did not want the 30-plus students in attendance reacting to tone and volume alone. Rather, he attempted to have the students do what seemed impossible — listen to the issues and not just the personas.

Broken down into three debate clips, Yeats showed the room Clinton and Trump’s responses to the topics of race, business policy and economic plan. For roughly 30 minutes, the room focused on the content of the responses, from Trump’s defending of stop-and-frisk to Clinton’s branding of her opponent’s economic plan as “Trump-ed up, trickled down” economics.

At the conclusion, Yeats opened the floor for questions and reactions.

“Who do you think won the debate?” Yeats asked. A smattering of murmurs broke out across the room, but no consensus was shouted aloud. “Let me rephrase. Who here thinks Hillary won?”

Every hand save a few went to the sky.

“Why do you think Hillary won?” Yeats asked.

Despite Yeat’s urging for students to focus on the topics and not the demeanor, the tone of the debate was too prominent to deny.

“Hillary was more collected and composed,” a female student said. “Trump was aggressive and loud. He doesn’t seem like a born leader.”

“He speaks in very general terms, and repeats himself” said senior Felipe Roche, pointing out the repeated use of Trump’s “law and order” phrasing to sum-up his response to crime. Beyond that point, Roche pointed out his interpretation of Trump’s misunderstanding of businesses relocating outside the U.S. 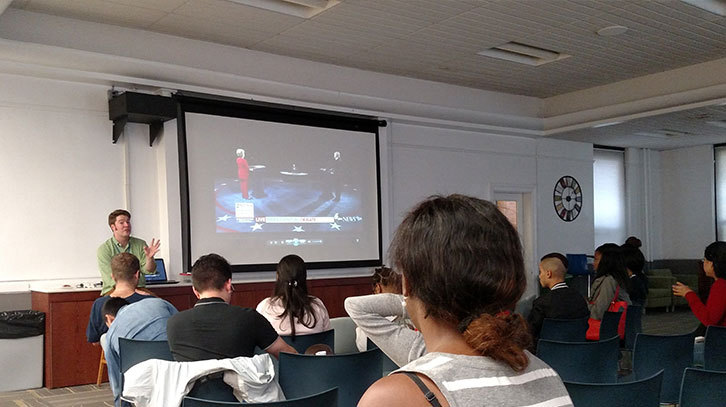 “They should talk about the types of businesses that are leaving the U.S., and not just the general statement of businesses leaving,” Roche said. “Most of these are manufacturing jobs, unskilled labor positions.”

The conversation moved about the room. Another student who watched the debate cited Trump’s reference of stop-and-frisk, the practice of police departments that was deemed unconstitutional in New York, and agreed with Trump’s statement that it was effective.

“Trump is right. With stop-and-frisk, statistically, crime was reduced,” he explained.

“It’s more than just statistics,” Lisa Gagliardo, a junior said, “Look at the psychological impact. Someone will leave their home, see a cop down the street and have a panic attack.”

A Call to Action

While the election offers many discussions on topical issues, the ultimate takeaway was that those students in attendance were not only interested in the political landscape, but in the issues as well. Juniors Chris Malcaus and Juanita Arias, members of the SJC Brooklyn Social Thinkers club, closed the discussion, urging those who hadn’t registered yet to do so, using easily accessible resources such as TurboVote.

The second presidential debate is Oct. 9.

Presidential Lecture Series Back at SJC

The Power of the Millennial Vote

Thank you very much for writing this great summary of the event!