Living in the St. George Towers

The number of SJC Brooklyn students who chose to live in the St. George Towers is booming — and for good reason.

Resident assistants Hannah Boyne and Nicholas Hernandez said they love living at the off-campus residence hall in Brooklyn Heights because of the welcoming community and the seemingly endless options of things to do in the area. 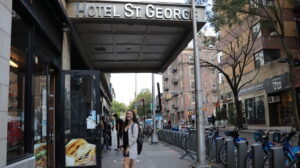 The two sophomores aren’t alone. Nearly 120 SJC Brooklyn students live at the St. George Towers — a 47 percent spike from 2017. The residents represent 18 states across the country, as well as four countries.

Boyne, a nursing major, decided to move to the off-campus residence hall as a freshman to shorten her commute to school and to gain some independence.

“I lived in the Bronx, but the commute is so far,” said Boyne, a member of campus’ swimming team. “And I have three brothers, so I wanted to get out of the house and be on my own.

“The residence hall doesn’t feel like a typical dorm,” Boyne added. “This used to be a hotel, so our dorm feels like living in a hotel. It’s more like having an apartment than a dorm room.”

“Having been in charge of residence life for the past eight years, I am always amazed by the mix of students we get from across the country and the world,” she said. “I believe the small size (of the College) and the sense of community is what attracts them to, not only SJC, but to living at the St. George Towers.”

Living in the St. George Towers

When Boyne and Hernandez talk about living in the residence hall, they rave about the many fun activities available in the area. The residence hall is a short walk to the trendy DUMBO, a neighborhood filled with shops and eateries. The students also enjoy hanging out near the Brooklyn Heights Promenade nearby, where they soak in the view of the Brooklyn Bridge and the Manhattan skyline over the East River. 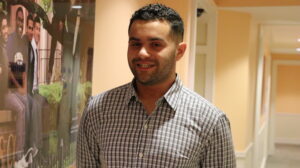 Boyne noted that she enjoys going to the Promenade and stopping for ice cream or indulging in free activities, including kayaking and outdoor movie nights. Hernandez added that he also likes to go down to Montague Street, a minutes-long walk from the residence hall, for more dining options. On a nice day, the Florida-native can be found walking across the Brooklyn Bridge to spend time in Manhattan.

“The shuttles are always on time,” said Hernandez, a business administration major who plays on SJC Brooklyn’s baseball team. “We also have the trains, which I take from time to time. You really get the New York experience.”

“The shuttle is really convenient,” added Boyne. “There are other options you can do — like walking or taking the train. But at the beginning of every semester, you can tell St. Joseph’s what time your classes are, and they will make sure there are shuttles ready to pick you up and drop you off. I find it easier than paying to take the subway.”

Recreation Club Puts on a Show for Dillon Students

Author Reading from an Alumnus