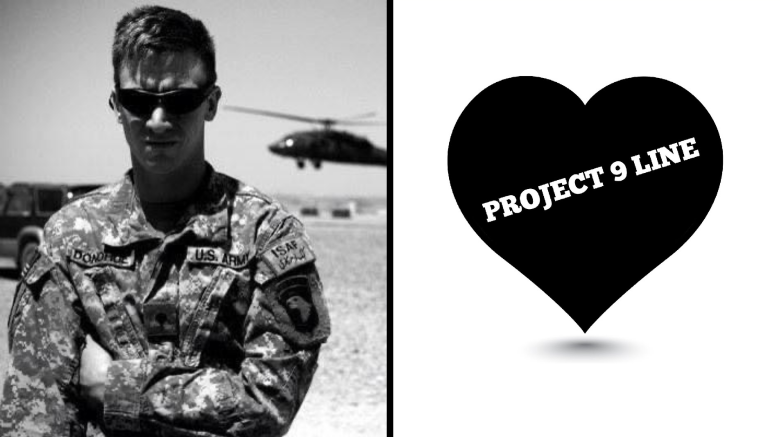 Patrick Donohue earned an associate’s degree in business before going on to be a stockbroker. But in the spring of 2008, he started feeling like he was part of the problem, rather than part of a solution. So he decided to make a change.

That summer, he enlisted in the U.S. Army. But when he returned home in 2012, he struggled with post-traumatic stress disorder (PTSD).  So he decided to make another change.

Thus, his business Project9line was born, through which he helps local veterans struggling with PTSD reintegrate into society through the arts and activities.

“I had a really tough time in every aspect of reintegration,” said Donohue, who served a tour in Afghanistan from 2010 to 2011. “I pretty much pushed everyone away, and I was isolated and alone and unhappy. Finally it dawned on me that I should ask for help.

“I was exposed to these new ways of healing, like meditation, yoga and writing,” continued Donohue, who earned an MBA from St. Joseph’s University in 2017. “From there, I created the program that completely changed my life. Helping others has helped me — it’s only through this work that I have a happy life today.”

Project9line, a non-profit organization which started in 2014 out of Donohue’s kitchen and has since expanded to its own location in Islip, offers such activities as guitar lessons, stand-up comedy, a visual art class, yoga and Brazilian jiu-jitsu, with a few dozen veterans participating each week.

“My favorite part of owning Project9line is that there are a bunch of vets who have told us how our programs have saved their lives,” said Donohue, who lives in Islip. “And I know it’s true, and there isn’t anything better than that. It’s really beautiful.”

In addition to running Project9line, Donohue also started his own law firm, Patrick Donohue Law, through which he assists military and veterans with their legal needs.

“The reason I went to law school is because I wanted to strengthen my ability to help veterans,” said the 41-year-old, who earned a law degree from Touro University in Dec. 2019 before passing the bar exam in Feb. 2020. “I help veterans with their disabilities claims, and I do criminal law.”

It was during his first semester in a marketing class with Jerome Grossman, director of Graduate Management Studies at the Long Island Campus, that Donohue came up with another idea that really excelled his business to the level its at today: Vets MMA.

“We had to team up and create a fictitious business or product, then present it to the class in a Shark Tank-type competition,” Donohue explained. “I told my group, ‘We could create something that would never exist, or we could create a veterans program, and I can bring it to life pretty much right away.’ So we created Vets MMA, which still exists today.”

Not only did they end up getting an A on the project, but they also won the competition. Vets MMA offered its first class on January 25, 2016 — a month after the marketing class ended — with the help of former Suffolk County District Attorney Tim Sini (then commissioner of the Suffolk County Police Department), who allowed them to use the defensive tactics training room at the Police Academy in Brentwood.

And despite the fact that Donohue chose St. Joseph’s in part because of its location and because of a strong desire to play a sport, he found he really benefited from his time at the University.

“Without St. Joe’s and that project, which led to our MMA/jiu-jitsu program, I don’t succeed at this level,” said Donohue, who helped start the Roller Hockey Team at St. Joseph’s. “There’s no way. I don’t graduate law school, I don’t know where I am today without it.”