‘The Masked Singer’ Debuts in Brooklyn 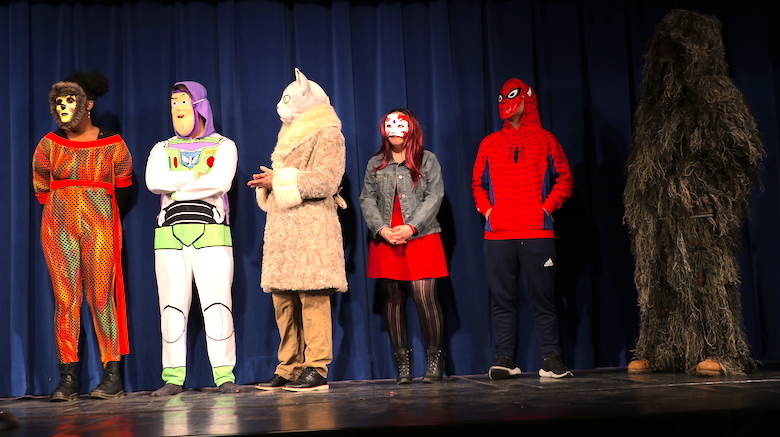 “The Masked Singer” competition made its way to SJC Brooklyn this week as students and staff hosted the campus’ own version of the popular FOX reality show to help raise money to send 10 students to North Carolina for Alternative Spring Break.

Michele Corsetti, SJC Brooklyn’s coordinator for off-campus housing and community service, served as master of ceremonies, hosting the event with Andrew Wenzler, a junior child study major and president of Students Taking a Role In Positively Empowering Society (S.T.R.I.P.E.S.). Both were fully prepared with clever puns.

“I love awful TV shows like ‘The Masked Singer,'” said Wenzler, who played a large role in organizing the fundraiser. “The idea of the mystery behind who the singer is really draws people in.”

The fundraiser was a play on “The Masked Singer” reality show, where celebrities — donning a full costume that masks their identity — sing on stage in front of a panel of judges. The audience, along with the judges, try to decode the identity of each singer.

The contestants brought their A-game to a competition filled with carefully developed choreography, piano playing and costumes.

The first act — the lion appropriately singing the Lion King’s “I Just Can’t Wait To Be King” — started strong, with the judges showering praise on the lion’s costume and dancing.

“I’m always for a lion that will give me fashion on the safari,” Judge Hawker noted. “And that lion slayed!”

Ultimately, the big title was handed to Gangone for his rendition of Frank Sinatra’s “New York, New York.” The Office of Student Life employed a special text-to-vote system for the more than 50 people in attendance.

Gangone had a lot of faith in his performance.

“How does it feel to win?” Wenzler asked.

“I don’t know how it feels to lose!” Gangone replied.

Gangone, Weltzer and Whitney and seven other SJC Brooklyn students will take part in the College’s Alternative Spring Break service trip to Kure Beach, North Carolina. Ticket, food and raffle sales from the event all go toward funding the trip.

The students will be accompanied by Corsetti and SJC Long Island’s Director of Campus Ministry Cristian Murphy ’14. They will work with Community Collaborations, a nonprofit organization that provides supervision and training for students on service trips.

An ‘Ace’ for SJC’s William Kropp