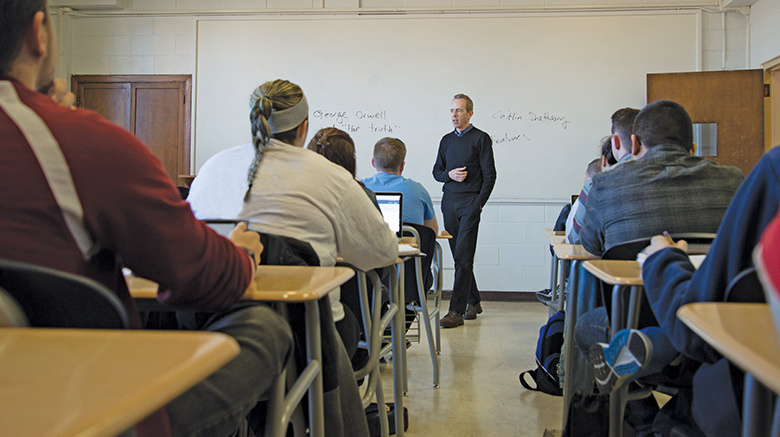 “A journalist’s first obligation is to the truth” reads the initial tenant of Bill Kovach and Tom Rosenstiel’s “Elements of Journalism.” Unfortunately, too many content creators posing as journalists refuse to let truth get in the way of a potentially viral post.

Fake news, and the issues of ethics and morality in journalism, has grabbed headlines for most of 2017. It’s a matter that was brought to the forefront during the 2016 presidential election, and continues to persist.

After Donald J. Trump’s victory over Hillary Clinton, Stanford University researchers found that many students across the United States couldn’t tell the difference between reported news, an opinion piece and a corporate ad. Meanwhile, fewer and fewer Americans are getting their news from print sources, while more are using social media (two in 10 versus four in 10, according to the Pew Research Center). This creates an environment where an innocuous tweet or unsourced Facebook post can become gospel in mere hours.

Just as a professional journalist has had an obligation to the truth, we have to start thinking about the things we post on Facebook and share. Is there verification for this? Or am I just sharing something because it’s my ideology that seems right to me?”

#PressOn gained popularity this February by encouraging social media users to recognize and dispel instances of fake news, and support reputable print journalism. The call to action was met with widespread boosts in subscriptions to The New York Times and The Washington Post, among other publications. 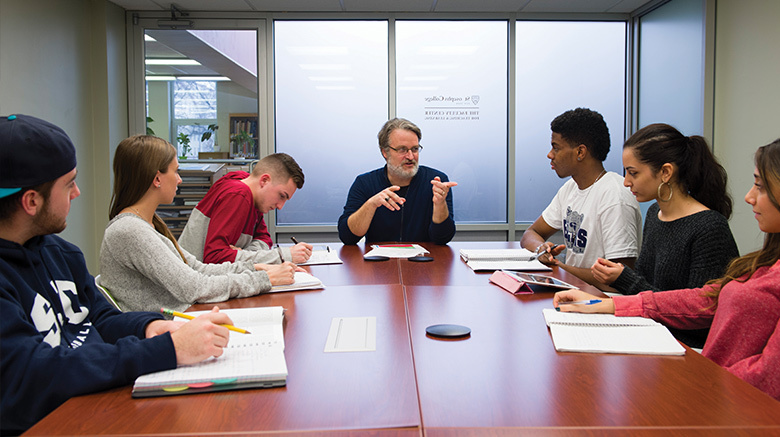 Theodore Hamm, Ph.D., chairman of SJC Brooklyn’s Department of Journalism and New Media Studies, stresses the importance of truth to students in his journalism classes.

In the classrooms of St. Joseph’s College, the Department of Journalism and New Media Studies (JNM) is also attempting to #PressOn. SJC professors are using the current media landscape to develop a new generation of truth seekers – to combat the spread of potentially dangerous discourse and to promote the honest journalism readers need.

Dr. Hamm is the founder and former editor of The Brooklyn Rail, a renowned publication for arts, culture and politics throughout New York City and beyond. With a doctorate in media, culture and communications from NYU, Dr. Phillips specializes in new media and technology with a profound interest in contemporary music and popular culture.

Both men agree that the importance of truth in storytelling is essential. Not simply for fledgling journalists and writers.

“The people are the media,” said Dr. Phillips. “That’s truer than ever. We have opportunities to participate in this. And if we do it from a responsible and caring perspective, that might be one way to get at the truth.”

The two professors acknowledge that 2017 is a particularly influential year in their classrooms — and presents a teachable moment for proper journalism to prosper.

Since Journalism and New Media’s inception at SJC, ethics in journalism has played a large part in the classrooms. As part of the major’s Intro to Journalism (JNM 108) course, students are encouraged to not only produce compelling content, but to exercise the fundamentals of accurate and unbiased journalism in every story they write.

“Anyone with a cellphone camera can be a journalist on the scene,” Dr. Hamm said, noting the fact that citizen journalism can shed light on fringe stories and controversies, from police brutality to cases of excessive force on a United Airlines flight.

“That’s journalism too. Just as a professional journalist has had an obligation to the truth, we have to start thinking about the things we post on Facebook and share,” Phillips said. “Is there verification for this? Or am I just sharing something because it’s my ideology that seems right to me?”

“In most people’s minds, journalism is kind of an old fashioned term,” Dr. Phillips said. “My students aren’t reading hard copies of The New York Times, they’re getting their information from a variety of different sources. Where people are getting their news, in many cases, is people sharing media on Facebook and other social media platforms.”

Many readers who take in news on the internet believe they are well-informed – that the stories they digest represent the entire perspective and that a Google search will pull in the necessary information.

Unfortunately, in the age of curated content and personalized browsing, technology is crafting its own echo chambers. What users search on Google, what they buy on Amazon, etc., is tracked and noted so future searches and purchases will be curated to these preferences.

“With the coming of the internet and Google and YouTube, you get the phenomenon of the filter bubble,” Dr. Phillips said. “When you think about the ways of which people search for information online, we are increasingly separated. Because the providers of that information are trying to serve us, but it ends up giving us more of what we’ve already defined ourselves as being interested in.”

The filter bubble is only one example of how the new news pushes media consumers toward a one-dimensional perspective. To combat a rising tide of bias, SJC’s Journalism and New Media chairs make it a point to encourage students to resist the complacency of a filter bubble, and to seek a wider exposure.

“I encourage (students) to get a broader scope,” Dr. Hamm said. “They have to be able to evaluate what’s truthful and not truthful, but also what’s appropriate. I think there’s always bias in media, but is the bias … skewing our understanding of the discussion?”

“My students will not all be journalists,” said Dr. Phillips, “but most of them are interested in some sort of media careers. I think they’re all going into some kind of eld where being informed communicators and consumers of communication is going to be incredibly important. We grow when we are exposed to things that we would not naturally gravitate to.”

It’s that notion of a wide variety of perspectives that makes SJC’s liberal arts education essential today, more than ever. Inside every classroom, not just Journalism and New Media, the College’s mission is to bring an open mindset to its students. And, in that effort, generate a more responsible and helpful media landscape for the future.

“The ethics of journalism apply to all of us,” said Dr. Hamm, “whether we want to make it our career or not.”

‘Educator of the Year’